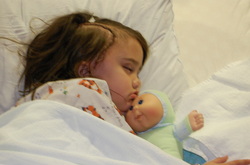 Ellie is a very sweet 6 year old who has been through more than any child should go through. We found out on Jan 4th that she had a massive brain tumor. She has been through two brain surgeries, they were able to remove 98% of the tumor. We have a long journey ahead of us but we are moving in the right direction.

On Tuesday I took Ellie into the Pediatrician because the past two weeks she had been complaining of headaches off and on. When we arrived at the pediatrician she immediately sent me for a catscan. From there we were sent right back to the office. At this point I knew something was wrong because they didn't take out the IV in Ellie's hand and sent me immediately back to the Dr's Office. Come to find out it was worse than I thought. The Dr. informed me that she had a tumor in her brain and that I had to go to Children's Memorial Hospital in downtown Immediately. I was a wreck so my mom came and picked me up at the office and drove me downtown and we met my husband and stepfather down there. When we met with the neurosurgeon she showed us the scans of her brain. It was SOOOOO SCARY. Ellie had a tumor that took up more than half of her brain. It was pushing the left side of her brain over and closing off the Veintricular fluid line. If that happened then her brain would fill with fluid and she would instantly die.

So they decided to admit us on the third floor Neuro Constant Care. We went to get an MRI that night but we ran into another snag. Ellie was wheezing so they couldn't give her the sedation medication to give her the MRI so we had to wait till 9:30pm for them to put her under. By the time we arrived back to the room it was around 12:30am. The next day Ellie was to have surgery in the afternoon. She was not so pleased with us because she had not eaten since Tuesday morning before the Dr. Apt. They went into surgery and the hardest thing I had to do was say goodbye to my precious perfect little girl. But we were hopeful that she would get through it. After 9 hours of surgery we got word that they were closing her up and we saw the doctor. Only to hear that he was only able to get 50% of the tumor because she was bleeding too much. It was safer to go back in another day once her vitals were back to normal. So then began the healing process.

Ellie was healing very well like a trooper and then the weekend came and they discovered that she had pneumonia and her blood levels were really low. So from there they gave her two blood transfusions and meds for the pneumonia. They were unsure if the surgery would go on on Tuesday. After a long day on monday we heard from the doctor that evening. He informed us not to be surprised if they would have to do another surgery after the tuesday surgery. He also informed us that the Pathology report came back and that it was a Very Rare Tumor that was either a Grade 2 or Grade 3. They would know more after the next surgery. So we woke today at 6am and we began the longest day of my life.

So after the second 9 hours of surgery the doctor informed us that he was able to get 98% of the tumor and that the last pieces were attached to some very critical parts of the brain that could cause long term neurological problems. So they made a decision to keep that piece in. He also told us the whole board of Nuero Surgery was going to be meeting about Ellie's case on Thursday along with the Pathologist and Radiologist to determine where we go from here. He said that we have three options we leave the tumor and watch it very closely over the next few months, we do radiation, or chemotherapy. I think we have ruled out Chemo but it still not not official until the team decides what the best course of action is. They said it might even be next week before we know anything. But for now we are concentrating on the recovery process and staying very positive.

I have been sleeping in a chair next to Ellie's bed since Tuesday. Tonight my mom is sleeping at the hospital with Ellie while I get some rest at the Ronald McDonald house a few blocks away. Ellie woke up from surgery and she is doing FANTASTIC. Dave and I couldn't be more proud of her. She will be having an MRI tomorrow to make sure that there is only a little left in the brain. Dave has been commuting back and forth due to having to work. We can't afford for him to miss any days. He did take the two surgery days off. He has been Amazing. I am so blessed to have him. We have a long road ahead of us. Ellie and I will be making trips down to children's maybe daily or weekly we will have to wait and see. But for right now Dave and I feel like we won the lotto tonight. Thank you for everyone's prayers and everything.
God bless my baby girl
She is doing so well.
We are keeping the faith and I will keep you informed.

Please Email Hopeandfriendship@comcast.net to help Ellie is the sweetest kindest little girl. She is in 1st grade and was excelling before she was hospitalized. She is a great big sister and even better daughter. She loves to swim. She was working hard on swim lessons and completed level 3. She has been doing Taekwondo since she was three and has recently achieved her Red Belt. I can not say enough about how wonderful of a child she is. I feel blessed every day to have her in my life. I truely am going to enjoy every day with her and not take anything for granted.

Ellie, a sweet, kind 14 year old that lost her life after a 8 year battle with a brain tumor.